Fukushima was once a lively prefecture. It used to be famous for marvelous handpicked fruits, exquisite pottery, pristine mountains, a feudal capital Aizu-Wakamatsu, and Dr. Hideyo Noguchi, who helped develop a cure for yellow fever. And now, of course, it is renown for its nuclear power plant meltdown, which has transformed the prefecture into an entirely different place.

All of Fukushima Prefecture is suffering, more deeply than anywhere else in the earthquake-tsunami affected areas. Fukushima’s reputation, now worldwide, is in total disarray. And that is having enormous consequences in that visually magnificent rural prefecture. Not only is there a “no go zone” around the nuclear plant, but business in general is terrible. No one wants to buy anything produced by the farmers or caught by the fishermen there. Thousands of people have left, some going as far as Hawaii or other distant places in Japan. And that means many schools and businesses have been greatly reduced or closed. The prefecture itself is out of money; and the clean up work is far from over. In fact, it will be years before even uncontaminated regions get back on their feet. And the radioactive areas will need far longer, even generations. To put it simply, the atmosphere in Fukushima is dark, heavy, and rather depressing.

School children near the nuclear plant now have to wear a gauge around their necks. This device keeps track of radiation levels. Periodically the government collects these plastic little necklaces and records the data in them. No one is quite sure what is done after that, but hopefully the information will be used in health-inducing, health-protective ways. 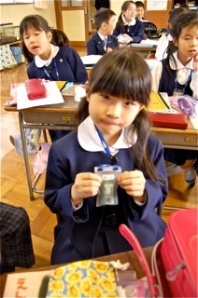 Showing the radiation gauge she must now wear.

All of these things are precisely the reason why Debbie Buckler, founder of The 500 Frogs Project, wanted to give homemade creatures to children in devastated areas, especially in Fukushima Prefecture. She asked me for help in finding places to donate her frogs. Fortunately I had a friend, Satsuki, who worked in one of Fukushima’s schools. Thanks to her we were able to meet the kind teachers and heart-melting first and second grade students and to bring a moment of joy into their worry-filled lives. 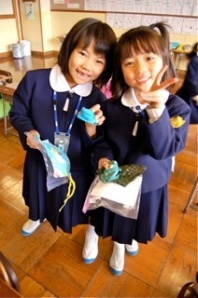 The joy is evident.

Satsuki brought five of her junior college students to assist us. As we entered the first grade, all the very polite, uniformed children stood up and bowed to us. The looks on their faces were precious beyond belief. There was a sense of great anticipation and excitement, blended with extreme restraint not to rush up and see up close what we were arranging on the tables. One little boy in the back was so excited, he jumped around saying, “This is sooooo exciting! This is sooooo exciting!” 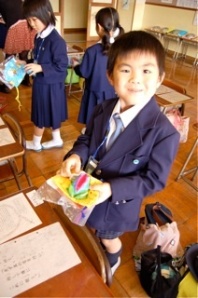 As our junior college helpers lay the colorful, imaginative gifts on the table, Satsuki and I explained to the children about the love and care that was in each frog. Surprise and joy lit up every child’s exhausted face as we talked. And when we gave the go-ahead, they did indeed rush up to the table, but in an impressively orderly manner. They did not push, grab, or snatch. Rather, they gazed at all the frogs, admiring in wonder the little critters with carefully painted folded hands and friendly, welcoming expressions. 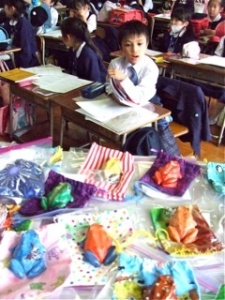 The love-filled, colorful frogs waiting for their new friends. 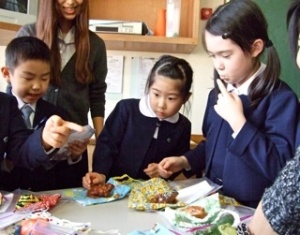 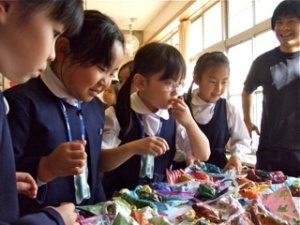 Which one will be my new friend?!

Then one by one the children selected their frog. 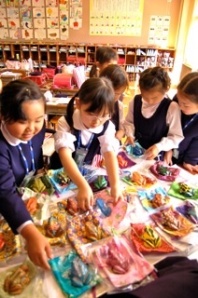 This is the one!

And if two kids longed for the same one, they did “scissors-paper-stone” to determine who would get it. The disappointed child would go to another spot to select a “second best”, which would surely soon become a favorite and good friend. 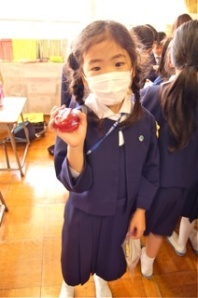 Proud of her selection and new friend.

We did the same with the second graders. They, too, were stunningly well mannered and equally as delighted. They, too, chimed out “Arigatou gozaimasu!” Thank you very much, as they bowed in gratitude to us. 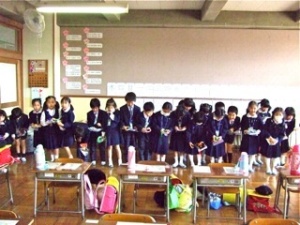 They are all in this together, now with love from over seas.

We took lots of photographs, of course, and admired each child’s frog. We told them they should name their critter and keep it as a friend. First grade kids immediately put up their hands and said, “Mine is named Keiko.” “And mine is PocoPoco.” I’ll call mine Minnie.” “And mine will be Megumi.” 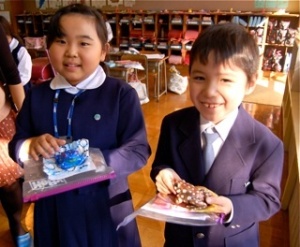 What shall I name him/her?

The second graders were quieter, more thoughtful. They said they would think about it and decide that night at home. 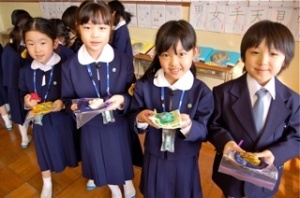 Such a delightful day!

Of course, those moments with the absolutely adorable children of Fukushima were deeply touching and thought provoking. And all of us hope that the vibrant frogs from so far away will be a reminder that they, the children, are not forgotten and that people everywhere really do care.

The delightful pictures speak for themselves… artists and all involved with this project, you are doing a wonderful thing! 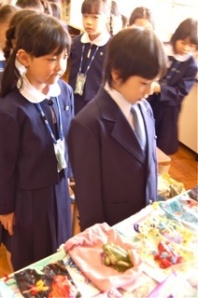 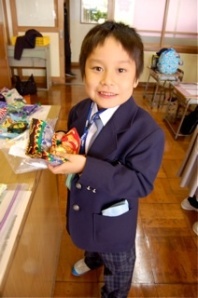 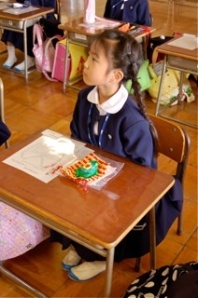 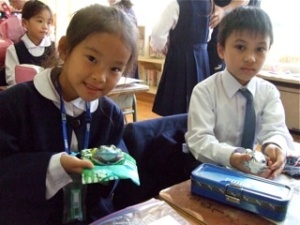 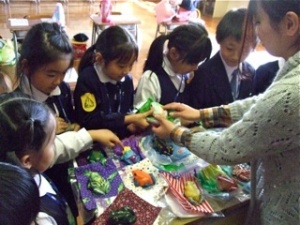 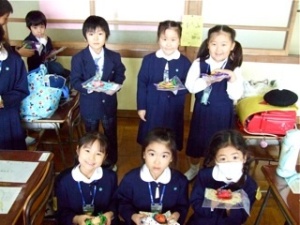 This entry was posted in Uncategorized. Bookmark the permalink.

1 Response to Visiting Fukushima With Frogs